12 or 20 questions: with Jill Hartman 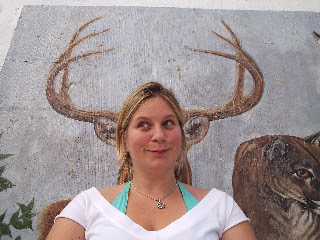 Calgary poet Jill Hartman writes disjunctive narrative poetry about pachyderms, pirates, belly dancing, Ouija, Scrabble, and The Greatest Outdoor Show on Earth. She’s presented and performed her poetry across Canada and as far afield as Scotland, and her writing’s appeared in Queen Street Quarterly, filling Station, and DIAGRAM, in the anthologies Post-Prairie (Talonbooks) and Shift & Switch (Mercury), and in chapbooks from MODL Press, Olive Press, and her own chapbook series semi-precious press. Her first book of poetry, A Painted Elephant, (Coach House 2003) was shortlisted for both the Stephansson and Lampert Awards, and was featured on the program “Heart of a Poet,” which you can see on BOOK TV and BRAVO. Her second book of poetry, Booty: Hurricane Jane and Typhoon Mary, was co-written with Brea Burton and comes out November 2007 form the Mercury Press.

When I got an offer of publication for A Painted Elephant, it made me feel that living in a shack in the woods was a charming interlude in a life of letters, rather than the first act of a spiral of eccentricities that would see me disappear into the interior of BC in a converted school bus, never to see the prairies again. Hard to say if that is a good thing, really. I think I need publication to stave off the eccentricity, or at least keep it at a good level. I’m very easily discouraged, but luckily, easily encouraged as well.

This so counts as two questions, rob!

I grew up in Calgary, I’ve lived here most of my life so far. My family’s been in Alberta for a century or so, farming, coal mining. My parents both moved to Calgary when they were teenagers, and I like to think about the move from rural to urban over generations. So the city I grew up in is often what I write about—certainly it was a major part of my first book—and the landscape of the city and of what’s outside is a big deal to me. I write a lot about alienation from and reclamation of place and space.

Race and gender—well of course! More on the gender end of that, seeing as I’m not as confronted with “difference” in this culture/place in terms of my race as some writers are—but race and gender share that thing, that power thing. Who’s got it, how is it being used, how complicit am I in its misuse? The book I co-wrote with Brea Burton coming out this fall, Booty, treats sexualized and violent slang, cultural attitudes. It’s about power, sexuality, language. I prefer it when the power that gender confers is given up or equalized. Or at least recognized. Booty tries to take that power through irony and challenge. It’s a laugh riot!

3 - Where does a poem usually begin for you? Are you an author of short pieces that end up combining into a larger project, or are you working on a "book" from the very beginning?

I usually have an idea for a book from the get-go. I have tried writing without an aim, but I much prefer having a title, a structure—I’ll start with a title like St. Ampede, I will imagine how it’ll be organized or what the form will be, say the book will have sections that are about each of the areas at the Calgary Stampede, then I can start colouring it in. “The Big Four Building” section title leads me to
tip holy cows
bulldoze Victoria Park
bull-in-a-china one-stop-shop for all your lottery, casino, junk food needs

Sort of macro-to-micro. Of course the title and structure usually change, after I’ve generated some material, but that’s how I start. If I know I am working on a book, rather than noodling around, it really helps me to be motivated.

Readings are part of the creative process, although not in a huge way. It helps to read stuff that is in progress to get a sense of how it is or isn’t working in terms of sound and rhythm, readability even, for choosing which work is meant to be performed, or how. It can help me realize if something is really oblique, and gives me an opportunity to think about accessibility. I want people to enjoy my work, at least on some level, maybe even on the level of frustrating them if that’s going somewhere. But readings don’t usually get me generating new work. Unless it is someone else’s reading of course.

5 - Do you have any theoretical concerns behind your writing? What kinds of questions are you trying to answer with your work? What do you even think the current questions are?

A question about questions. So theoretical! And what are THE current questions! As if we should all be asking the same ones!!! Well, my big thing for the last couple of years has been thinking about writing as play. The serious game. And I meant “writing” there as a noun, but of course it’s also a verb in the sense that I am playful while writing. So I’ve been addressing that directly with my project about Scrabble and Ouija. And also that project is about where creativity comes from, where language comes from, why language. Communication. Accessibility and inaccessibility. And that leads me to wonder about what art is. Is it entertainment? Does it have to justify itself? What does it look like when a difficult idea is trying to be entertaining?

6 - Do you find the process of working with an outside editor difficult or essential (or both)?

7 - After having published more than a couple of titles over the past few years (both chapbooks and books), do you find the process of book-making harder or easier?

The process of book-making. Hmm. I love it. I love making chapbooks, except that it’s pretty daunting to me now. Now that I really understand the amount of time I will need to make a chapbook that I am happy with—the sheer physical labour! The last chapbook I completed was a “Poetic License”—a card I printed on a letterpress. So daunting to imagine anything more ambitious. And there are a few unfinished chapbooks in various stages in various boxes and drawers. How can I start a new one?

But book books—well, I guess it’s easier? It’s definitely easier knowing what I am in for. But it’s harder because of course that means I must push myself farther, whether it means that the project is more intellectually rigorous, or I am pickier about my publisher, or I feel I must promote myself and the work better than I did with the last book. I liked being emerging. It felt like I couldn’t make a mistake. I remember joking with Julia Williams that neither of us managed to be a child prodigy. With my first book, I could imagine that I had a chance at that kind of status again. But now I am in the ugly teen-age of it all.

I had a bite of a wild pear in early September. Or I suppose it was a feral pear. Paul picked it and brought it back to the cabin where we were having our “summer” vacation. It was tough-skinned and under-ripe. It made me sad. I love the fall, it makes me a little melancholy in a good way. In a “boy it sure smells good” way.

9 - What is the best piece of advice you've heard (not necessarily given to you directly)?

Probably Fred Wah’s “so what.” It’s both a challenge and really zen at once, depending how encouraged or discouraged you are. It helps me keep the writing going somewhere for some reason.

Me:
“I wrote an 8-page poem that uses every letter in the Scrabble game and the score adds up to exactly the year that the game was invented!”
My Inner Fred:
“so what?”
Me:
“yeah, you’re right, it’s complete bullshit. It was fun to do it at least. Maybe there’s a phrase or two in there I can use.”

I usually forget this, because I don’t think very well when I am frustrated, but I find reading is very inspirational. Also watching films. I usually feel like writing after reading something—books, newspapers, signs. Rereading what I have written in a project can help too—I often just start adding/changing when I do that.

As the author of A Painted Elephant, I called myself a disjunctive narrative poet. I meant that my writing was disjunctive narrative poetry, not that I myself was disjunctive and narrative (because I was a child prodigy, I could get away with ambiguous language and people thought it was on purpose! Oh, to be emerging again.) But Booty: Hurricane Jane (my half of the co-written book) isn’t really narrative or disjunctive. It’s serial and iterative. So as the author of A Painted Elephant and Booty, I haven’t decided what to call myself. I’m glad that the two books are quite different. It shows range. It feels really really good. I think it is an excellent book. I can say that with no hesitation or false modesty because it is co-written with Brea Burton, whom I admire so much. I suspect we’ll be unappreciated in our time, but I only say that because I am a sullen teenager now. But seriously now. I am very proud of Booty—working with Brea (and with Cara Hedley in the project’s early days) has been one of the most rewarding creative endeavors I’ve tried out so far. I would love to write collaboratively more. Jason Christie and I keep threatening to co-write a fantasy novel.

Well, culture. So all of those things excluding nature. But also nature. And of course books!

14 - What other writers or writings are important for your work, or simply your life outside of your work?

Julia Williams, Brea Burton, Cara Hedley, angela rawlings, Jason Christie, Natalie Simpson, Jordan Scott, Fred Wah, Robert Kroetsch, Nicole Brossard. And beginning a list is sometimes the worst thing in the world to do—talk about a form dictating the content! Talk about rejection of closure! I can’t leave the list at that but I have to! Ok, if I was on a deserted island, who would I want with me…

15 - What would you like to do that you haven't yet done?

I would like to go to New Zealand and Spain.

16 - If you could pick any other occupation to attempt, what would it be? Or, alternately, what do you think you would have ended up doing had you not been a writer?

I like to fantasize about vineyards. Hot air balloons. Arboriculture. Soup entrepreneurship. Stichomancy. And I like to sew.

17 - What made you write, as opposed to doing something else?

Yesno by Dennis Lee, and we watched The Shining again the other night, what a great movie!

19 - What are you currently working on?

I’m working on a novel. It’s a ghost story.