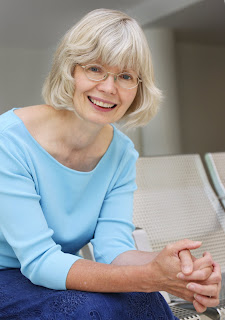 Alice Major has published seven collections of poetry and one novel. She has won the Malahat Review’s long poem contest and been short-listed for the Pat Lowther Award, the City of Edmonton Book Prize (twice) and the Stephan G. Stephanson Award, Writers Guild of Alberta (three times the bridesmaid, never the bride.)

She has been president of the Writers Guild of Alberta and of the League of Canadian Poets, and chair of the Edmonton Arts Council. In 2005, she was named the first poet laureate of the City of Edmonton – a city she has made her home since 1981. She grew up in Toronto, took a degree in English at the U of T’s Trinity College, and first came west to work as a newspaper reporter in the central Cariboo region of B.C.

Her most recent collection was The Occupied World, from the University of Alberta Press (2006). Her eighth book of poetry will also be published by UAP in spring, 2008.

Do you mean writing it or having it published? Realizing that I could write a whole book was life-changing, but publishing it was like watching the silt settle over one more trilobite on its way to fossilization.

That first book was a novel and therefore something of an aberration. I haven’t published fiction since, so in retrospect it seems like an evolutionary blind alley.

I’ve lived in Edmonton since 1981. Geography absolutely affects my writing, though it took me a while to notice the plains landscape that now surrounded me. It’s a subtler kind of beauty than the coast or the mountains, and for a while I only noticed what wasn’t here. But poetry is based on the art of attentiveness, so in some ways a plains landscape is excellent training for that faculty.

As for gender and race – I’m aware of writing from the point of view of a woman, and the issues of roles and expectations are important. (One of my collections, Some Bones and a Story, is a collection of dramatic monologues in the voices of different female saints.) However, having grown up in a blue-collar family, I think that economic class tends to trump gender as a formative experience. That’s what really shapes my ideas about what poetry is and does.

3 - Where does a poem usually begin for you? Are you an author of short pieces that end up combining into a larger project, or are you working on a "book" from the very beginning?
Oh, a poem always has to begin as sound, an ‘ear-worm.’ I typically like to work on big projects, sequences and so on. But however lofty and well-formed the overall idea might be, nothing’s going anywhere until some combination of sound and rhythm clicks.

I find it interesting that it the process is so opposite from fiction. To create fiction, I have to see something –to visualize where the action is going on, who’s going to move into the scene, what they’re going to do. The words to encode that can come afterwards. For poetry, though, some words have to come first.

And it feels as though they literally come from different parts of my brain. Fiction seems to start at the back of my head, poetry at the side.

4 – Are public readings part of or counter to your creative process?
They are part of the polishing process. That’s how you find out what lines work, how people respond to a piece overall.

I like reading. Not as much as I like writing – it’s a thrill when you feel you’ve landed an audience, but it doesn’t last anywhere near as long as the rush of feeling something new click in your brain.

5 - Do you have any theoretical concerns behind your writing? What kinds of questions are you trying to answer with your work? What do you even think the current questions are?
I think a great deal about poetic theory, because it concerns the relationship between my work and a reader. I don’t think we’ve adequately incorporated the new discoveries of cognitive science and neuropsychology into critical theory. By and large, I find that Damasio, Dennett and Oliver Sachs are more valuable in shaping my own ideas of what I do when I write than people like Derrida or Hélène Cixous.

6 - Do you find the process of working with an outside editor difficult or essential (or both)?
I’ve never had the luxury of working with an editor intensively on a manuscript, except for the copy-editing process. I am profoundly grateful for good copy-editing, though I suspect I might become a bit ornery with substantive editing. I do enjoy workshopping with my poetry group.

7 - After having published more than a couple of titles over the years, do you find the process of book-making harder or easier?
I’d say that, on balance, it gets harder – though that may be an illusion fostered by our inability to really remember previous pain. Certain technical things come more easily, but the challenge of finding something new to do with the tools you’ve mastered becomes greater. You don’t want to go on writing the same poems that you did when you were thirty.

8 - When was the last time you ate a pear?
I’m the kind of woman who constantly buys pears, leaves them on the window sill to ripen, then forgets them. I can’t remember one that didn’t go brown and gooey into the garbage pail.

9 - What is the best piece of advice you've heard (not necessarily given to you directly)?
“Poets take on enormous challenges of technique, first of all in fun.” It’s from Derek Walcott’s book, What the Twilight Says.

10 - What kind of writing routine do you tend to keep, or do you even have one? How does a typical day (for you) begin?
If I have the enormous good fortune to be able to get up and stare out the window in my bathrobe for a couple of hours, that’s wonderfully productive – but rare. I really don’t have a routine. I just write when I can.

11 - When your writing gets stalled, where do you turn or return for (for lack of a better word) inspiration?
Oh, the usual writer’s tricks – trawl through a thesaurus for interesting words, make up silly metaphors (cat is to book as air is to ….? ), scribble in my journal.

But the main thing I’ve learned is to depend not on external inspiration, but to trust the inner space. If I’m quiet enough, the connections come.

12 - How does your most recent book compare to your previous work? How does it feel different?
It’s longer :-)

This newest book The office tower tales will be coming out in spring, 2008 from the University of Alberta Press. I’ve been working on the darn thing for ten years. It has a frame narrative based on the lives of a group of office workers over the millennial year, and one of the characters (Sheherazad, the girl from public relations) tells a series of stories that illuminate issues of power, beauty, love and fear that they are facing.

I’ve always had an interest in tale-telling and the creation of mythologies, which comes out in this work. It continues my love of narrative poetry. It adds more rhyme – I developed a stanza form for the frame narrative that includes a variable end-rhyme pattern to swing the material firmly over the prose-poetry divide.

I hope it has a feeling of lightness for readers. Its tone is meant to be comic in the large sense. I like entertaining people – in the original sense of ‘entretenir,’ to hold together.

13 - David W. McFadden once said that books come from books, but are there any other forms that influence your work, whether nature, music, science or visual art?
Science, absolutely. Physics, mathematics, chemistry – they are full of wonderful metaphors to work with. Cognitive science fascinates me.

14 - What other writers or writings are important for your work, or simply your life outside of your work?
Gawd, even in blogspace it would be too long to print. Chaucer, Browning (both of them), Donne – more recent poets like Brodsky, Carol Ann Duffy, Albert Goldbarth. Derek Walcott is absolutely one of my favourites. (Another quote of his: “To be told you are not yet a city or a culture requires this response. I am not your city or your culture.” It allows me to feel it’s all right to live in a place that is not considered the centre.)

But probably the biggest influence is Robert Burns. Not fashionable to admit, I suppose. But I can’t avoid it – I was born in Scotland; my father wrote poems that were modeled on Burns’ work (including a reply to the poet by the mouse), and I can’t help putting a dimeter at the end of stanzas. It took me years to figure out where that tic came from.

I feel a great liking for Burns – his ideals, his wry compromises, his interest in preserving popular folk song, his belief in a decent humanity, the way he can switch between Lallans and the high-falutin’ poetic diction of his day, and his wonderful, wonderful command of rhythm and sound.

15 - What would you like to do that you haven't yet done?
Write a decent haiku. I can’t do short.

16 – If you could pick any other occupation to attempt, what would it be? Or, alternately, what do you think you would have ended up doing had you not been a writer?
I was going to toss off a flippant answer like “depressed.” But then I thought it over.

I have taken a circuitously single-minded path to being a poet. I’ve had quite a few occupations in my life: bank teller, bookkeeper, newspaper reporter, technical writer, arts administrator, teacher. I could have gone on progressing in the corporate world because I was rather good at that. All that time, it has been very difficult to give myself permission to be a poet – an occupation that does not look spectacularly useful and, deep inside me, seems self-indulgent. But poetry is what I always returned to.

I have often felt at a disadvantage because of this diffident approach. Had I been a ‘career poet’ sooner, had I made the connections in university, then perhaps I’d have been able to give my poetry a sturdier shove out from the shore of anonymity. Instead, I was forty before I published my first collection and the rowboat may never get past the sandbar.

Still, I think that to be a poet (as opposed to being other sorts of writer), it helps when you do other kinds of work too. Poets should be in the world of humanity. Maybe fiction writers need to sit at their desks to churn out twenty pages a day, but I need to find out something about the world that I can compress into a few lines. I couldn’t have written my latest book, for instance, without years of working in office towers.

17 - What made you write, as opposed to doing something else?
I like doing it more than I like doing anything else.

The most recent ‘great’ book that I read has been Richard Dawkins’ The Ancestor’s Tale – an absolutely wonderful book on evolution.

19 - What are you currently working on?
Elegy. Life takes you there sooner or later.
12 or 20 questions archive
Posted by rob mclennan at 11:22 AM

when I first saw that yet another email had come from rob, i was going to delete it. then i saw that Alice Major was the guest, and read on through (answering a phone call in between). i have had the delight of working with her through the office i am employed at, and to peer into this 12 or 20 dialogue has been like that perfect bit caraway gouda during a production meeting late in the afternoon.