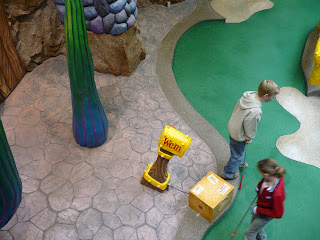 a reading series lovingly hosted by rob mclennan during his tenure as writer-in-residence at the University of Alberta (2007-8); the name "Factory (West)" refers to the fact that I have been running readings for years in Ottawa since 1995 that now exist under the title The Factory Reading Series, held regularly(ish) at the Ottawa Art Gallery;
a variety of poetry and fiction (etcetera) presented on the third Tuesday of every month from January to May, 2008 in (upstairs) at Cafe Select, upstairs, 8404-109th Street
doors 7pm; readings 7:30pm
The fourth reading will be happening on Tuesday, May 20
with readings by:

Laura Farina's first book of poetry, This Woman Alphabetical, was published by Pedlar Press in 2005. It was nominated for the ReLit Award and won the Archibald Lampman Award. She has sat on the editorial board of Arc: Canada's National Poetry Magazine, taught writing to young people in Ontario and Chicago and given readings of her work across the country. She is currently working on a book of poetry about cities, seasons and nostalgia.
Priscila Uppal [see her 12 or 20 questions here] is a poet and fiction writer born in Ottawa and currently living in Toronto. Among her publications are five collections of poetry: How to Draw Blood From a Stone (1998), Confessions of a Fertility Expert (1999), Pretending to Die (2001), Live Coverage (2003) and Ontological Necessities (2006); all with Exile Editions; and the novel The Divine Economy of Salvation (2002), published to critical acclaim by Doubleday Canada and Algonquin Books of Chapel Hill and translated into Dutch and Greek. Her poetry has been translated into Korean, Croatian, Latvian, and Italian, and Ontological Necessities was short-listed for the prestigious Griffin Prize for Excellence in Poetry. She has a PhD in English Literature and is a professor of Humanities and English at York University.
Christopher Doda [see his 12 or 20 questions here] is a poet and editor living in Toronto. He is the author of two collections of poetry, Among Ruins (2001) and Aesthetics Lesson (2007), both from the Mansfield Press. He is an editor at Exile: The Literary Quarterly and Exile Editions, as well as the Book Review editor for Studio, an online poetry journal.
Alice Major [see her 12 or 20 questions here] has published seven collections of poetry and one novel. She has won the Malahat Review’s long poem contest and been short-listed for the Pat Lowther Award, the City of Edmonton Book Prize (twice) and the Stephan G. Stephanson Award, Writers Guild of Alberta (three times the bridesmaid, never the bride.)She has been president of the Writers Guild of Alberta and of the League of Canadian Poets, and chair of the Edmonton Arts Council. In 2005, she was named the first poet laureate of the City of Edmonton – a city she has made her home since 1981. She grew up in Toronto, took a degree in English at the U of T’s Trinity College, and first came west to work as a newspaper reporter in the central Cariboo region of B.C.Her most recent collection was The Occupied World, from the University of Alberta Press (2006). Her eighth book of poetry, The Office Tower Tales, is newly published by UAP.
further readings: keep watching here for information on June + July events, etc. (as well as the Facebook page for the series), as the reading series is taken over by Edmonton poet/publisher Trisia Eddy!
previous readings;
Posted by rob mclennan at 11:37 AM

Hey There
I represent a small start-up publisher who is looking for writers to contribute content to a classified sites, social community section. Soon, the publishers will be launching the print version of the site in Edmonton and will also be looking for people to contribute editorial content for print. Do you know anyone or a group of people who would be interested in contributing to something like this?