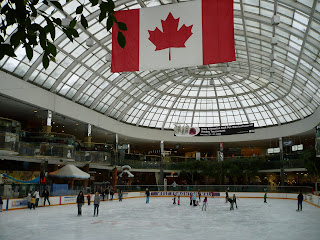 a reading series lovingly hosted by rob mclennan during his tenure as writer-in-residence at the University of Alberta (2007-8); the name "Factory (West)" refers to the fact that I have been running readings for years in Ottawa since 1995 that now exist under the title The Factory Reading Series, held regularly(ish) at the Ottawa Art Gallery;
a variety of poetry and fiction (etcetera) presented on the third Tuesday of every month from January to May, 2008 in the Underdog (downstairs) at The Black Dog Freehouse, 10425-82 Avenue, Edmonton AB; [venue change still in effect; Cafe Select, upstairs, 8404-109th Street]
doors 7pm; readings 7:30pm
The third reading will be happening on Tuesday, March 18
with readings by:

Jasmina Odor is a writer and an instructor of English at Edmonton's Concordia college. She writes short stories and has recently finished a manuscript of short fiction. You can find her stories in The Fiddlehead and the Coming Attractions 05 anthology.
Mark McCawley [see his 12 or 20 questions here] is a fiction writer, editor, poet, and small press publisher. Since founding Greensleeve Editions in 1988, he has published over fifty chapbooks. Since 1993, he has edited the litzine Urban Graffiti. From 1986 to 1993, Mark taught poetry and fiction as a creative writing instructor for Continuing Education (now Metro College). He has given readings of his own work across Canada: in Montreal, Toronto, Calgary and Edmonton. He is the author of eight chapbooks of poetry and short fiction, most recently, Stories For People With Brief Attention Spans (1993) and Just Another Asshole: short stories (1994), both from Greensleeve Editions. His short fiction has also appeared in the anthologies: Burning Ambitions: The Anthology of Short-Shorts, edited by Debbie James (Toronto: Rush Hour Revisions, 1998) and Grunt & Groan: The New Fiction Anthology of Work and Sex, edited by Matthew Firth and Max Maccari (Toronto: Boheme Press, 2002). Mark McCawley can be contacted via email: mccawley64@hotmail.com
D.M. Bryan was raised in Edmonton, Alberta, where she liked to play dinosaurs in her backyard with the boy from across the alley – until he moved away when they were both four. She remained alone in Edmonton until adolescence when she moved to Calgary, where fate reunited her and her childhood playmate. Taken with this coincidence, they married, moved to Toronto, and produced a son and daughter. Bryan has acquired an assortment of degrees over the years, including a BFA in Photography and an MA in Communications, both from the University of Calgary, and a BFA in Film from Ryerson University. After what she describes as “various yo-yo throws” across the country, Bryan has settled in Calgary where she now teaches at the University of Calgary. Gerbil Mother, her first novel, will be released in March 2008 by NeWest Press.
Douglas Barbour [see his 12 or 20 questions here] , poet, critic, and reviewer, is Professor Emeritus of English at the University of Alberta, where he has taught creative writing, poetry, Canadian literature, twentieth century poetry and poetics, and science fiction and fantasy. Books of poetry include Visible Visions: The Selected Poems of Douglas Barbour (NeWest Press 1984), which won Alberta's Stephan Stephannson Award for poetry, and Story for a Saskatchewan Night (rdc press 1989). More recently, Fragmenting Body etc. (NeWest Press 2000), Breath Takes (Wolsak & Wynn 2002), A Flame on the Spanish Stairs (greenboathouse books 2003), and Continuations, with Sheila E. Murphy (University of Alberta Press 2006). Critical works include Daphne Marlatt and Her Works, John Newlove and His Works, bpNichol and His Works (ECW Press 1992) , and Michael Ondaatje (Twayne Publishers 1993). Lyric/Anti-lyric: essays on contemporary poetry appeared from NeWest Press in 2001. Transformations of Contemporary Canadian Poetry in English appeared from Adam Marszalek in Poland in 2005. Essays have appeared in journals and anthologies in Canada, the United States, Australia, Great Britain, New Zealand, Denmark. He has delivered papers at conferences on Canadian Studies and modern poetry, in Australia, Germany, New Zealand, Poland, Sweden, Scotland, and, of course, Canada. He was inaugurated into the City of Edmonton Cultural Hall of Fame in 2003.
For further information, email rob mclennan at az421(at)freenet(dot)carleton(dot)ca
further readings:
April 15; readings by Kim Minkus (Vancouver), Christine Wiesenthal (Edmonton), Catherine Owen (Edmonton) + Myrna Kostash (Edmonton)
May 20; readings by Laura Farina (Banff) + tba
previous readings:
Posted by rob mclennan at 2:19 PM