12 or 20 questions: with Robert Majzels 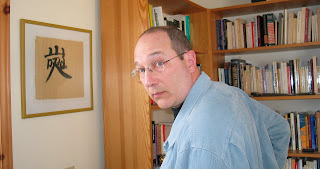 Robert Majzels is a novelist, playwright, poet and translator, born in Montreal, Canada. After a misspent youth ending up in the guerrilla zones of the Philippines, he returned to graduate from Concordia University (MA, English Literature) in 1986. He taught creative writing workshops in prose, poetry and drama there for thirteen years, before he escaped to China for a couple. He is presently back in Canada, masquerading as an Associate Professor in the English Department of the University of Calgary.
Robert is the author of three novels, a full-length play, and a number of translations. Two of his novels have been translated into French by Claire Dé.
Majzels’ work has been a continuing exploration of the forms and ethical underpinnings of writing.
About his first novel, Hellman's Scrapbook (Cormorant Press, 1992):

"... a huge, complex and extraordinarily rewarding novel." The Globe and Mail
"... daring in form, political, eclectic in setting and character and masterfully threaded with an intriguing story line." The Montreal Gazette

About City of Forgetting (Mercury Press, 1997), short-listed for the 1998 Hugh MacLennan Fiction Award:

“...a novel of Beckettian inertia combined with Joyceian allusiveness... a formidable and esoteric discourse on power, decadence and remembering.” The Globe and Mail

“...the mysterious, murderous architecture of Majzels’ gesture, in which language is both victim and description of victimization, and in which standard narrative has been put in a compressor and squeezed into more interesting ways of thinking... The reader won’t encounter another book like this one anytime soon.” Review of Contemporary Fiction

“[Apikoros Sleuth] takes the reader back to the primal scene of the book, where reading is ritual and where eyes, of their own magical accord, unlock terrible knowledge.” The Montreal Review of Books

16 - What would you like to do that you haven't yet done?
I'd like to finish answering these questions.
17 - If you could pick any other occupation to attempt, what would it be? Or, alternately, what do you think you would have ended up doing had you not been a writer?
I would have liked to be a cat burglar, so that I get my money directly from the taxpayers without having to go through the troublesome process of applying for grants.
18 - What made you write, as opposed to doing something else?
I tried a number of other things and failed. As a writer in Canada, there's no pressure to succeed; everyone expects you to fail.
19 - What was the last great book you read? What was the last great film?
See Question 8.
20 - What are you currently working on?
These 20 questions. But I'm done now.
12 or 20 questions archive
Posted by rob mclennan at 10:12 AM

Robert is very interesting, but not nearly as interesting as your questions.

I mean, could we meet? Sometime soon? I'd like to show you my poems. All of them.