12 or 20 questions: with Sheri Benning 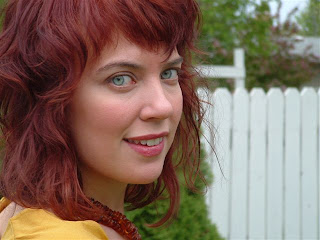 Sheri Benning grew up on a small farm in central Saskatchewan. Her second book of poetry, Thin Moon Psalm, Brick Books, 2007, recently won two Saskatchewan Book Awards -- The Poetry Award and The City of Saskatoon Award. In 2004 Thin Moon Psalm was the recipient of the Alfred G. Bailey Manuscript Award. Her first book of poetry, Earth After Rain, Thistledown Press, 2001, also won two Saskatchewan Book Awards. Sheri is the recipient of the Earle Birney Poetry Prize, the second place recipient of the Bliss Carmen Poetry Award and in 2004 she was awarded the Saskatchewan Lieutenenant Governor's Award for Achievement in the Arts. Her poetry has been published in numerous Canadian literary journals and anthologies including Breathing Fire 2; Fast Forward: New Saskatchewan Poets and Third Floor Lounge. She's currently a doctoral student at the University of Alberta.

My first book gave me a momentary feeling of legitimacy as a writer, but then you have to put that book aside and get back to reading and writing. It’s always wonderful to run into people who are kind enough to mention that they’ve read your work, isn’t it? It feels good to know you’ve communicated something.
2 - How long have you lived in Saskatoon, and how does geography, if at all, impact on your writing? Does race or gender make any impact on your work?
I’ve lived in Saskatoon for a year and a bit. Though I’m a doctoral student at the U of A, I moved out here from Edmonton, in part, to teach at St. Peter's College. I previously lived in Saskatoon for a couple of years while I was an undergrad at the U of S. Place bears a huge impact on my writing; my thinking often returns to rural Saskatchewan where I grew up. Race and gender impact my work in the way that they impact all I do, I suppose.

3 - Where does a poem usually begin for you? Are you an author of short pieces that end up combining into a larger project, or are you working on a "book" from the very beginning?
An individual poem starts with an image or gesture – a certain slant of light, to borrow a phrase. Larger projects start with an unrelenting question.
4 - Are public readings part of or counter to your creative process?
Readings used to make me quite nervous. They still do, but Don McKay said something to me once that really helped. He suggested that I think of the audience as a tuning-fork which might help me to better hear my own work. You hear your work differently if you’re trying to communicate it to an audience.
5 - Do you have any theoretical concerns behind your writing? What kinds of questions are you trying to answer with your work? What do you even think the current questions are?
How our identity is a precipitate of the place-worlds we inhabit; how to make sense of the alienation of displacement; how to articulate a landscape that is heavily manipulated by human intention such as that of rural Saskatchewan; how to move beyond nostalgia for lost places to forge an ethics that might keep pace with socio-environmental conflict.
6 - Do you find the process of working with an outside editor difficult or essential (or both)?
Essential. I have two friends, Sarah Tsiang and Tim McIntyre, with whom I share all my work. Tsiang is wonderful poet and McIntyre a PhD student at Queen’s. They’re rigorous and honest first readers. Don McKay edited Thin Moon Psalm. Don could understand what I was trying to say and then provided sensitive suggestions regarding how I might say it better. Working with him was invaluable. Tim Lilburn was the first person ever who I showed my poetry to. His conversation is crucial to me.
7 - After having published a couple of titles over the past few years, do you find the process of book-making harder or easier?
When writing, I’m never thinking about book-making exactly. I’m thinking about seeing my way through the poem, or the series of poems, or the essay at hand. I’m thinking about how to answer that unrelenting question.

8 - When was the last time you ate a pear?
This morning.
9 - What is the best piece of advice you've heard (not necessarily given to you directly)?
My dad is a fantastic storyteller. Once, in the context of a story that involved a fight at the Burr bar, he said something like this: “Skinny guys like us have to get the jump on people; we have to do it hard and do it first.” A friend of mine pointed out that, if you unhinge it from its context, that statement can be pretty good advice for a lot of things.
10 - How easy has it been for you to move between genres (poetry to non-fiction)? What do you see as the appeal?
Genre distinctions can be distracting. I didn’t really set out to move between genres. I think it was Ezra Pound who said that form bears the content of meaning. So certain questions, sentiments, experiences, etc. require different forms to be best articulated.
11 - What kind of writing routine do you tend to keep, or do you even have one? How does a typical day (for you) begin?
I prefer to write in the early mornings before the tasks of the day take over. I like the quiet of a still sleeping world.
12 - When your writing gets stalled, where do you turn or return for (for lack of a better word) inspiration?
I read. I met Annie Dillard several years ago and her advice was to read unlikely – books that might only tangentially inform the project at hand, books that’ll make you stretch. Also, it’s sometimes good to pull yourself out, to go for a walk around the block, as Bob Dylan would say.
13 - How does your most recent book compare to your previous work? How does it feel different?
Earth After Rain came out in 2001. In the interim I read a lot, traveled, etc. So the books are fueled by fairly distinct preoccupations. At the same time, I guess both books are overwhelmingly focused by my engagement with the places I’ve inhabited.
14 - David W. McFadden once said that books come from books, but are there any other forms that influence your work, whether nature, music, science or visual art?
My sister, Heather Benning, is a visual artist; she creates site-specific, sculptural installations. Lately she’s been compelled by how we relate to abandoned places. Her work and our conversations inspire me.
15 - What other writers or writings are important for your work, or simply your life outside of your work?
Here are but several writers whose work I consistently return to: Anna Ahkmatova, John Burnside, Dostoevsky, Paul Celan, Jack Gilbert, Louise Glück, Sean Johnston, Margaret Laurence (especially The Diviners), Tim Lilburn, Osip Mandel’stam, Don McKay, John Newlove, Rilke, Charles Simic, Karen Solie, Anne Szumigalski, Tomas Tranströmer, Charles Wright, and Jan Zwicky.
16 - What would you like to do that you haven't yet done?
I wish I could really know another language; I wish I could speak another language without hesitancy or shame.

17 - If you could pick any other occupation to attempt, what would it be? Or, alternately, what do you think you would have ended up doing had you not been a writer?
I don’t know. My mom has a photograph from when my siblings and I were preschoolers. In the photo we’re playing dress-up. My costume is hilarious to me – I’ve got my grandmother’s old eyeglasses perched on the end of my nose and I’m pretending to pore over an encyclopedia. I guess I’ve always wanted to read, write and teach.
18 - What made you write, as opposed to doing something else?
Again, I don’t know. Writing’s just always been the mode through which I make sense of the world. I can say this--the fact that I write has been helped along by my supportive, immediate family.
19 - What was the last great book you read? What was the last great film?
Eating Stone: Imagination and Loss of the Wild by Ellen Meloy.
I don’t think I’ll ever get the film The Wind that Shakes the Barley out of my head.
20 - What are you currently working on?
New poems that might articulate the changes in land-use in rural Saskatchewan and essays that are focused by my sister’s sculptural installations.
12 or 20 questions archive
Posted by rob mclennan at 10:29 AM